Tycoons Manny Pangilinan and Dennis Uy are looking to explore areas in the West Philippine Sea for oil deposits, the Department of Energy revealed last month. The agency opened bids for four nominated areas under its Philippine Conventional Energy Contracting Program, which covers possible petroleum deposits near Recto Bank, an area subject of the country’s territorial row with China.

President Rodrigo Duterte has approved the lifting of the moratorium on oil and gas exploration in the West Philippine Sea, the Department of Energy announced on Thursday. This move paves the way for the resumption of drilling projects in the disputed waters, as well as the planned joint exploration with China.

Energy Secretary Alfonso Cusi said in a statement that the President approved the department’s recommendation “so we may address the country’s energy security,” especially with the impending depletion of the Malampaya natural gas field.

Uy’s Udenna Corporation submitted bids for nominated areas 7 and 8 identified by DOE. The area is also called Reed Bank, an oil-rich sea feature within the Philippines’ 200-nautical mile exclusive economic zone that China is also claiming despite the ruling of an international arbitral tribunal which denied Beijing’s sweeping claims.

Pangilinan’s PXP Energy applied for Area 6, which covers a different section in the disputed waters. All bids were found compliant with the DOE’s legal, technical and financial requirements. Its subsidiary, Forum Energy, holds the rights to dig the adjacent area under Service Contract 72, which is secured in 2012.

Uy has been aggressively expanding his fuels business, having begun with his retail brand Phoenix Petroleum. In October 2019, he signed a deal with Chevron Philippines which allowed him to take a 45 percent stake in the Malampaya consortium, which extracts fuel reserves off Palawan province.

Pangilinan’s PXP Energy was also eyeing Malampaya and offered to take over the operations of the gas facility, but was rejected by DOE.

The research for additional oil reserves proves crucial for local supply. Energy Secretary Alfonso Cusi earlier said back that the Malampaya reservoir – which is positioned near Recto Bank – is only good until 2027.

Once the petroleum exploration and production contract expires in 2024, full control and control of the Malampaya natural gas and oil facilities will be turned over to the national government 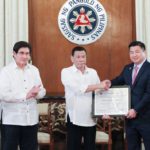 Dennis Uy Statement :“Let me be clear, we have NO intention to acquire ABS-CBN”.